At last my love has come along


Man I love that song. I've been hearing it on the radio so its been merrily spinning around my head. But for me the title doesn't concern a love for a new man, I'm quite happy with the one I've got. Yes folks it is the love of sewing that has arrived! 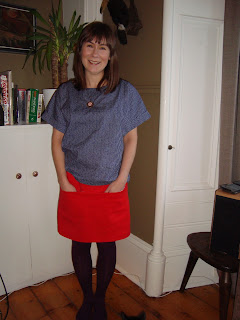 I have not one but two completed items in my wardrobe. This red skirt has been lying around waiting to be hemmed for so long that it has become covered in dust and cat hair. But no more!

The pattern is Vogue V1247. I'm sure you've all seen this a gazillion times and I was drawn like most to the funky front pockets. I lined mine with a floral cotton for the heck of it but I'm chuffed I did. The main fabric is a heavyweight canvas cotton, bought in Abakhan in Manchester. It was a precut piece so they're may well be other poly-materials lurking in there, but it has a nice brushed quality to it. 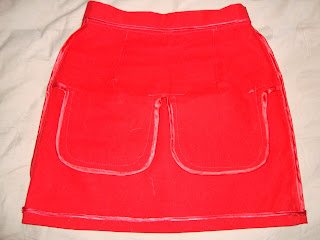 The seams are finished with satin bias binding as per instructions...a sweat inducing fiddly bit of maneouvering for this novice. Next time I would definitely line it (a la ScruffyBadger's lovely use of saucy hot pink) so would be able to skip this step. But in all honesty it wasn't that bad, and I'm darn pleased with how it looks on its innards.

To the fit...I chose to ignore the recommended measurements and decided my usual RTW size would probably be fine based on the finished measurements. Pure vanity! And I came to my senses but only after cutting. I tried to salvage the situation by halving the side seam allowances, which has given me enough room in the hips, but of course that threw out the waistband. After three attempts of lining it up, I decided to cut a size larger in the waistband but even that is a touch too neat. I've tried fiddling with hook and eye and popper closures, and though there is one popper on there just now, after a day of wearing I think I'll need to add another. I think a thinner waistband would work better for me next time though I intend to cut a size larger overall which would let the skirt sit lower than it does just now.

Like most I lengthened the skirt. Exposing your pants whilst attending to your child is a look I wanted to avoid. Even this 5 ft 2 tiddler needed 3 inches to keep her dignified.

On to the top. This is a Salme pattern Kimono top, which was started after the skirt but finished before it. Its simple constuction was a blessed relief! Even the pdf piecing together, tracing and adding of seam allowances was simple in comparison. The instuctions however were a tad too simple in my mind. I'm sure anyone with more experience would wizz through it but I really feel there could be more detail there for a beginner pattern. The turned back cuff insertion really bended my head!

The fabric is also a mystery Abakhan purchase. I tried a burn test which was pretty inconclusive. After one wear, I would say there is definitely one part cotton and ten parts crumple added in there. I'm going to have to break my no ironing ban for this one.

So two pieces of clothing that have found a happy home in my wardrobe. No longer are they left strewn disregarded in my home. I'm also chuffed that when I bought both these fabrics on the same shopping trip I pictured them to be pretty much exactly how they've turned out. I've a lot to learn in fitting and though I like to tell myself I like loose fitting clothes I realise that they are not always the most flattering considering my height.

So with my sewing mojo kicked off I'm RRRearing to go. The top was made as a wearable muslin for what I have in mind for Jungle January. I definitely think I can afford to go down a size but may go for a different pattern all together. Watch this space!

Katy (Ioftheneedle)
A Lancashire lass who has spent her adult life north of the border, En Ecosse. Accent now all over the place. A reformed raver wishing for her own vegetable patch.

Did you make that? pledge... to sew 12 items this year